Just call me a Person

I was born in 1873 and I am a ‘disturber’.  Like an alarm clock, I sometimes think I am here to wake up citizens.  But nobody ever really loved an alarm clock in action, no matter how grateful they are to be awake.

I didn’t learn to read until I was nine and my family farm in Ontario went bankrupt.  But I had an imagination could always start something new like the ‘Women’s Political Equality League’.  We called it the ‘League of Women’.  That title gave us super powers and made us laugh. But we were deadly serious.

I disturb the status quo, I know that.  The ladies tell me at the Calgary Literary Club that I am irrepressible because I speak up.   I like to read books but I also like to write them.  There is so much to express!  I am the kind of person who envisions a new world while I am writing. As I walk away, I am always remembering something else which must be said.

I was never afraid to be a mother of five and a wife.  My family inspired me to write and step into politics.  When I was a member of my Alberta parliament, a writer and an advocate of women’s rights, the editor of the Eye Opener made fun of us, calling us ‘literary ladies’ of Calgary.  The Calgary Literary Club met each month to discuss books at the Central Park Library. Why, that man should never underestimate the power of a woman. After writing 20 books, I outlived him anyway. And besides, I had a best seller.

I believe that it is wise to never retract, never explain, never apologize; get things done and let them howl. And as they howl, cast your vote. Give a talk, declare, write it down and send it in. Use your voice to raise the roof. The sky is the limit!

From my home in Beltline, I travel to Edmonton to take up my post as an MLA. I always believe in women, their ability to do things, their influence and power.  Women set the standards for the world and it is for us, the women of Canada, to set the standards high. It strikes me that men alone cannot make all the laws for men and women.  We women must get on to this matter of political identity.  When women form a chain, it will be a greater sisterhood that the world has ever known.

In the meantime, we had to get the vote. When the four valiant ladies and myself launched our theatrical effort in Winnipeg in 1914 called the ‘Mock Women’s Parliament’, I played the role of Mr. Roblin, the premier.  Our play for the Women’s Press Club exposed the absurdity of the arguments against women’s suffrage.

We portrayed our roles as women politicians who would not allow men to vote.  We debated whether or not men deserved the franchise and when the result was ‘no’, we showed that all those arguments were weak.  We acted out the story–  when women accept a low value of themselves from others, it makes life hard for all women.  So, we set the standard high.  Give us the vote or be done with it.

I believe that no nation ever rises higher than its women.  And we will see women rise, take on any career.  No longer can we fear that the advancement of women will interfere with some man’s comfort. Women can improve the world and must work to do so. We will serve and save the world.

I believe that women need property rights, factory safety legislation, medical care and dental care for our children.  Women are not ‘given’ in marriage.  A marriage is more than a commercial transaction between men. If a marriage that started with love ends in divorce, it should be equitable.  In other words, financial equality and mothers’ allowances are part of our due as citizens.  As a maternal feminist, I believe that women are both the mothers and guardians of the human race.  And that’s a tall order!

They say I am ‘vivid as a lily.’  Well the lily is a tough flower.  You can find it in the best garden or growing wild in a prairie ditch.  Lilies do not wilt or die easily! I think all women want to be vivid, to speak up, to be heard.  When women do nothing, we miss the sense of accomplishment and a job well done which sustained our mother’s mothers.  We have a legacy to share and a future ahead!

We travelled to London to question the constitution and put forward the petition in 1927 to make clear the term ‘Persons’ in the BNA act of 1867. After much brave work, the petition was successful in the ‘court of last resort’, the Judicial committee of the British Privy Council in London, England.  Women can now vote, hold property and enter politics in Canada.  Not a bad job, I’d say.  Well done my women-friends, Louise, Irene, Emily and Henrietta. They were my League of Women.

To women I say, take up the power of being a ‘Person’.  Vote, write, speak up.  Enter government.  Use your voice. Be a feminist. Use every avenue for your personal freedom, even the ‘court of last resort’ as we did in 1927.

I stood with my friends and launched the ‘Persons Case’.  You too can be a powerful woman by using your talents and standing together. Take up a new cause and wrestle it to the ground as they do in the rodeo events in this fair city.  No matter the result, you will win.  You will win by taking a stand.  Dare to take that opportunity!

We females are people but first and foremost, we are women. And our sisterhood will prevail. We never counted on being ‘Famous’. To stay brave in the face of all odds, we called ourselves the “Valiant Five’.  And we endured.

So, too, can you be that woman.   Fearless and bold. 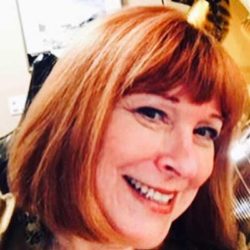